205 = The number of Pipers working all over the world.

79 = The number of promotions in the last year (some people were promoted more than once!)

🎉🎉 = How we feel every time a promotion happens.

Chili Piper is full of awesome people. And awesome people should be recognized for their work. And your job title should match the work that you’re doing. (Translation: We don’t want to see anybody doing manager-level work with a specialist title.)

Most people believe it’s important to recognize others for good work. But how do you go from “believing” to “doing”?

For us, we started by developing a basic progression framework — and building from there.

What is a career progression framework?

A career progression framework defines the skills required for each role, offering individuals a clear path to progress onto the next level.

We break it into Individual Contributor and Management tracks — because becoming a manager isn’t in everyone’s career path. There should still be avenues to advance your career without taking on managerial responsibilities. 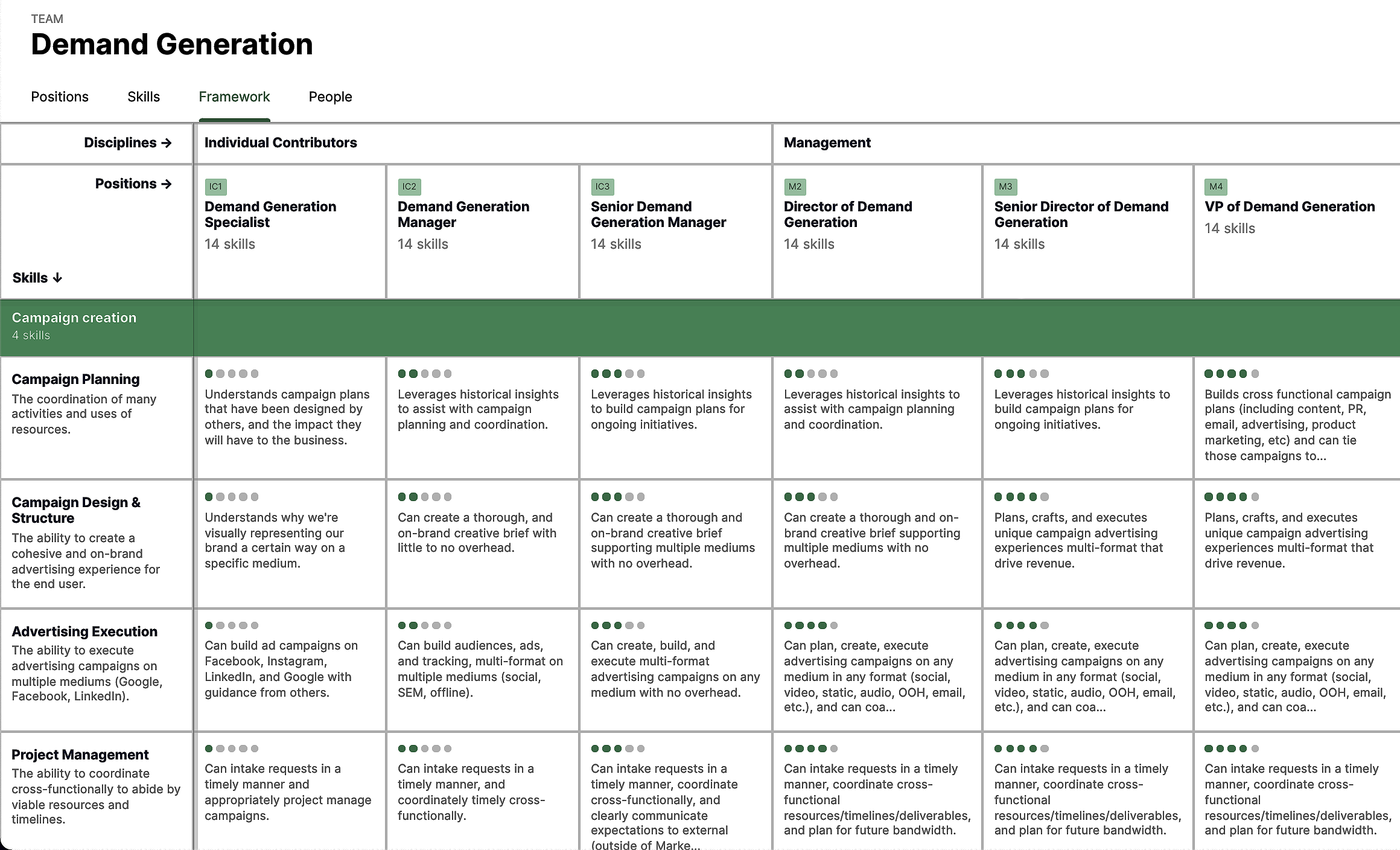 For nearly every team across the company, we’ve identified core skills required for each position. Then, we determined what level each individual should be working at to reach a certain title.

This entire idea started with a question:

If a role doesn’t have tangible results tied to it (like sales), how do you know if you’re doing a good job?

The answer at the time was … well, we don’t. So we decided to change that by building a framework of skills, one department at a time. Since the product marketing department leader was excited about bringing this framework to life, we started with his team.

First, he created a list of skills for a “good” product marketer. Then, we worked together to turn that list of skills into a full-blown matrix, keeping things high-tech with a snazzy spreadsheet.

Shortly after I put the finishing touches on the spreadsheet, I heard our designer was working with a cool tool to measure performance on his team. We hopped on a meeting and he shared his screen … and my jaw literally dropped.

I discovered I had spent hours reinventing the wheel.

The “cool tool” our designer showed me is called Progression, a company that helps define and measure career growth for your team. And it could do everything my spreadsheet accomplished — and more. So I quickly retired my short-lived spreadsheet and moved our efforts into Progression.

The next steps were building out a progression framework for any team that didn’t have tangible, numbers-driven goals. I sat down with all the department heads and we built the structure of their grid together and they fleshed out the matrix with the individual pieces.

Psst... If you’re thinking about implementing something similar to the Progression Framework at your company, feel free to download our framework to get yourself started.

As of writing, we’ve implemented the Progression Framework across almost all of our teams.

Because the framework is self-serve, everyone is empowered to start conversations around promotions at any time. If you and your manager both agree you’re working at a higher skill level, the promotion happens instantly.

We don’t believe promotions can only happen at designated “review” times during the year — if you’re working at a higher skill level, you deserve that higher title. Period.

(Although many managers set up six-month review cycles to ensure people who don’t proactively measure their skills are still recognized for good work.)

Additionally, we’ve developed our framework to be in line with a growth mindset. Rather than rating someone as “poor” or “excellent,” we rate them on a scale of “working towards,” “meeting,” and “exceeding” expectations.

Labeling someone as “poor” can bring a horrible self-fulfilling prophecy. Instead we start with a positive attitude. Anyone can be “good” at anything — it’s just a matter of growing toward it.

And if we really stay true to the principles of the growth mindset … it may never be.

It’s also worth mentioning the progression framework is only half of our Learning and Development initiatives at Chili Piper, which we see as two distinct entities.

Learning is role-specific. It addresses skills that are needed to do a specific job, whether it be analyzing data, developing strategies, or coding.

But people are not defined by their jobs. Chili Piper is full of humans, and humans can do any job, you just have to put them on the right path.

As part of this effort, all Pipers have a development plan (we call these Piper Plans). Everyone has a resource in addition to their manager to support them in working towards their goals.

Our philosophy regarding learning vs. development is too meaty to get into here, but we’ll be sharing more about our approach and learnings in the future. Stay tuned!

Feel free to copy our framework to get started building out a similar system at your organization (And if you have any feedback, let us know!)

Or, if you want to work at a company that values both professional and personal development, check out our job openings! We’re excited to meet you.

In the meantime, stay spicy. 🌶️