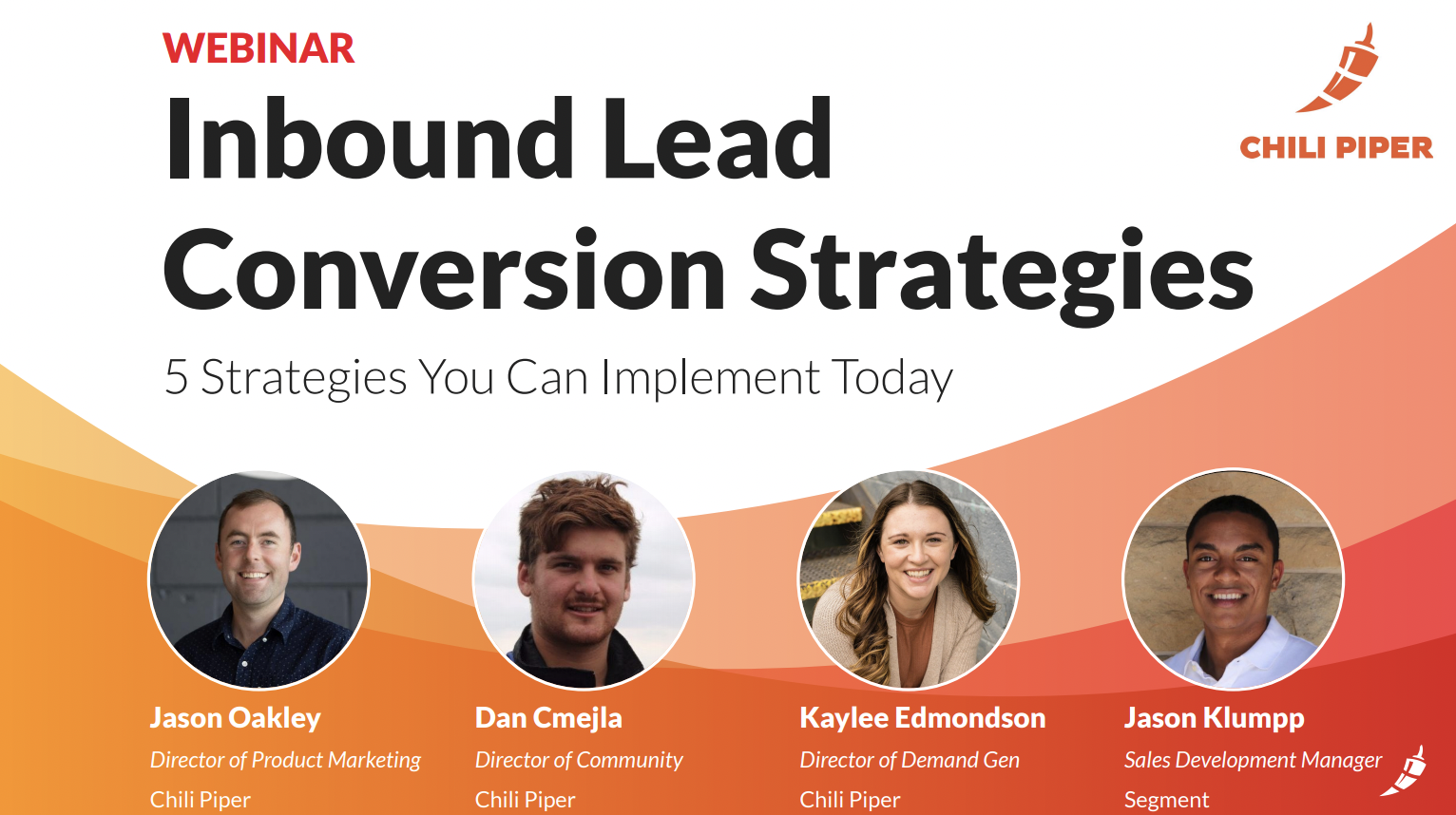 Everyone loves talking about inbound lead conversion — how important it is, how dramatically we need better conversions, and what to do about those leads that are lost.

We get it. That’s kind of what our entire business is predicated on — converting leads better, faster.

So, here are the juicy tidbits from the webinar, which you can watch yourself for free. (Scroll to the very end for that.)

Ah, almost forgot! Your awesome hosts for the webinar.

Master of AdWords, Kaylee has never met a piece of data she couldn’t interpret. She can lower your ROAS with one hand, while building her own house with the other hand. (Which she did.) Oh, and, she’s a rad mom, too, who is entering the world of Two Children.

Also a dad extraordinaire, Jason Oakley understands Chili Piper’s products better than the engineers who built it. Apart from having a very webinar-esque presence, clients love telling Jason how Chili Piper has transformed their business…and helped them understand the meaning of life. (Iffy on the second one, definite on the first.)(

Director of Community at Chili Piper

His last name is pronounced ShMAYluh, because I’m 95% sure you had no clue. He’s dressed up in a blanket scarf because he lives in Vermont, or somewhere near the Arctic Circle, not sure. One of the many feathers in Cmejla’s, er, knitted cap, is having built the world’s largest peer education community for sales ops, enablement, and leadership professionals. Hello, 18,000+ powerful people.

Jason doesn’t have to wear blanket scarves, because he’s in San Francisco. But, being the master of sales he is, has spent his career at some of the most prestigious and innovative businesses on the planet. After completing a degree in Cognition and Decision Making at Stanford and an internship at Tesla, Jason sharpened his sales teeth at Oracle as a Business Development Representative before making the move to turn Segment into the industry-leader it is today.

Hot Takes and Tips from the Inbound Lead Conversion Strategies

Use FOMO. It works.

Assignment rules create a FOMO-induced urgency that drastically cut their speed to lead and increased their follow-up.

From his experience in growing the Modern Sales Pros community, Dan provided the first of the webinar tips — FOMO!

If you take away the leads from a rep, they are more likely to not let that lead get away. Setting it up requires a simple lead routing rule, and the payoffs are enormous.

Use a micro-automation tool called TextExpander.

Dan swears this is a life-changer, and he’s kind of write (pun intended).

The power of micro-automation, which Dan tried to trademark on the webinar itself, does work wonders. Streamlining and or automation portions of your work that are repetitive, time-consuming, or otherwise onerous is a powerful use of your time and efforts.

Give your leads a second chance.

A lot of leads just slip through the cracks for whatever reason. Maybe they’re unqualified based on your specific routing rules.

But why let that lead just drop off?

Instead, allow that lead to enter an unqualified lead channel. They may not be an ideal client, but they are someone you want to have an AE follow up with.

Before Chili Piper, the team saw massive amounts of leads drop-off after requesting a demo and they had no way of disqualifying bad leads from scheduling with Calendly. The AEs calendars were being bogged down with bad meetings while the qualified leads needed to be chased (and booked manually).

Ben and his team chose Chili Piper as the solution to their conversion and automation problem. They now allow their prospects to schedule a demo directly from their home page, automatically qualifying and routing leads to the correct AE or SDR.

Give prospects the opportunity to schedule a demo for self-qualifying leads.

Form submissions are a massive source of information regarding your prospects.

But something you may not realize is that the very fact that a prospect has filled out, say, six form fields is itself a qualifying process.

For prospects like this, it makes sense to add a button to the capture form that allows prospects to click a box that says “I’m interested in scheduling a demo.”

At a previous company where Kaylee implemented this feature, 20% of all form submissions would check the bocks and take the demo.

Segment’s form allows you to get an instant demo of the product. The power of this is apparent at first blush. A hot prospect isn’t in the mood for someone to give her a call in a day or six.

They are ready to convert now.

But simply throwing leads in the instant mix willy nilly doesn’t work. Instead, you want to make sure that your leads are routed to the right lead.

Using Chili Piper, Segment qualifies leads in real time and routes those leads to the perfect AE or SDR.

Watch the Webinar Yourself

There are a ton of goods in this webinar that you can unpack for yourself.

Take a look. Could be the best 48 minutes you spend today.

Want to get your own demo? Book it now using the form below!