Conversion rate benchmarks tell us on average how many leads convert into opportunities.

For example, one important conversion metric for us at Chili Piper is the conversion rate from form-fill to qualified-held meeting.

But, regardless of what a conversion is for you, one thing is clear.

Marketers are interested in conversions and in understanding if the rates they’re seeing are aligned with industry benchmarks.

Knowing how you stack up is important because having a baseline understanding lets you know if you’re on pace with, ahead of, or behind the competition.

Here are current conversion rate benchmarks, along with helpful advice on how to capitalize on a higher percentage of your leads.

There are a ton of variables that determine a company’s website conversion rate.

On top of that, conversion rates can vary considerably from industry to industry.

So, there are a lot of factors at play when determining what the ultimate conversion rate is.

That said, a comprehensive study by WordStream pinpointed exactly what the average conversion is for all B2B companies across the board.

The average conversion rate for B2B companies is 2.23%! 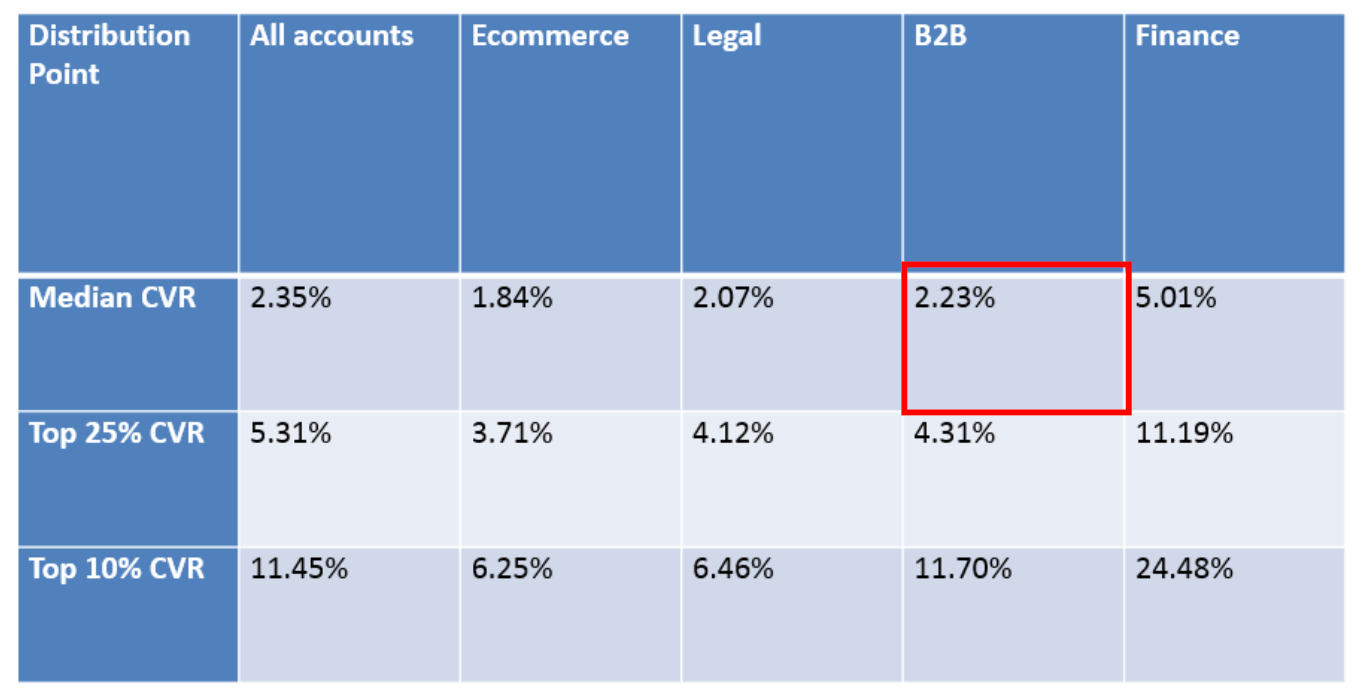 That’s the median conversion rate for all companies collectively within the B2B sphere. No wonder everyone in the space is trying to improve their CRO!

But the data doesn’t end there.

As you can see, the average conversion rate for B2B companies in the top 25 percentile is 4.31%.

And here’s what I found really interesting.

The average conversion rate of the best of the best B2B websites in the top 10% is a staggering 11.70%!

That’s 9.47% higher than the overall average of 2.23%. These brands get more than five times the conversions of most other B2B brands.

But then again, these are averages.

There are businesses with MUCH higher conversion rates. For example, TravelBank recently increased its conversion rate by 40% by using Chili Piper and Clearbit.

How insane is that?

What does this mean for you?

Well, if you’re hitting 2.23% it means you’re on pace, but if your conversion rate is lower than that — especially if it’s under 2% — there’s a problem and you need to fix any leaky holes in your funnel swiftly.

If, on the other hand, your conversion rate is hovering somewhere around 10%, you’re outperforming the vast majority of your competitors.

We have a long way to go in optimizing inbound conversions. After all, why invest in creating and capturing demand if you can’t successfully convert it?

If you want to see how Chili Piper can help double your inbound conversion rate, get a demo!

I should also highlight there’s a significant disparity in conversion rate benchmarks between different devices — something that should be taken into account when determining how effective your sales and marketing efforts are.

The most current ecommerce data right now, from Statista, finds: 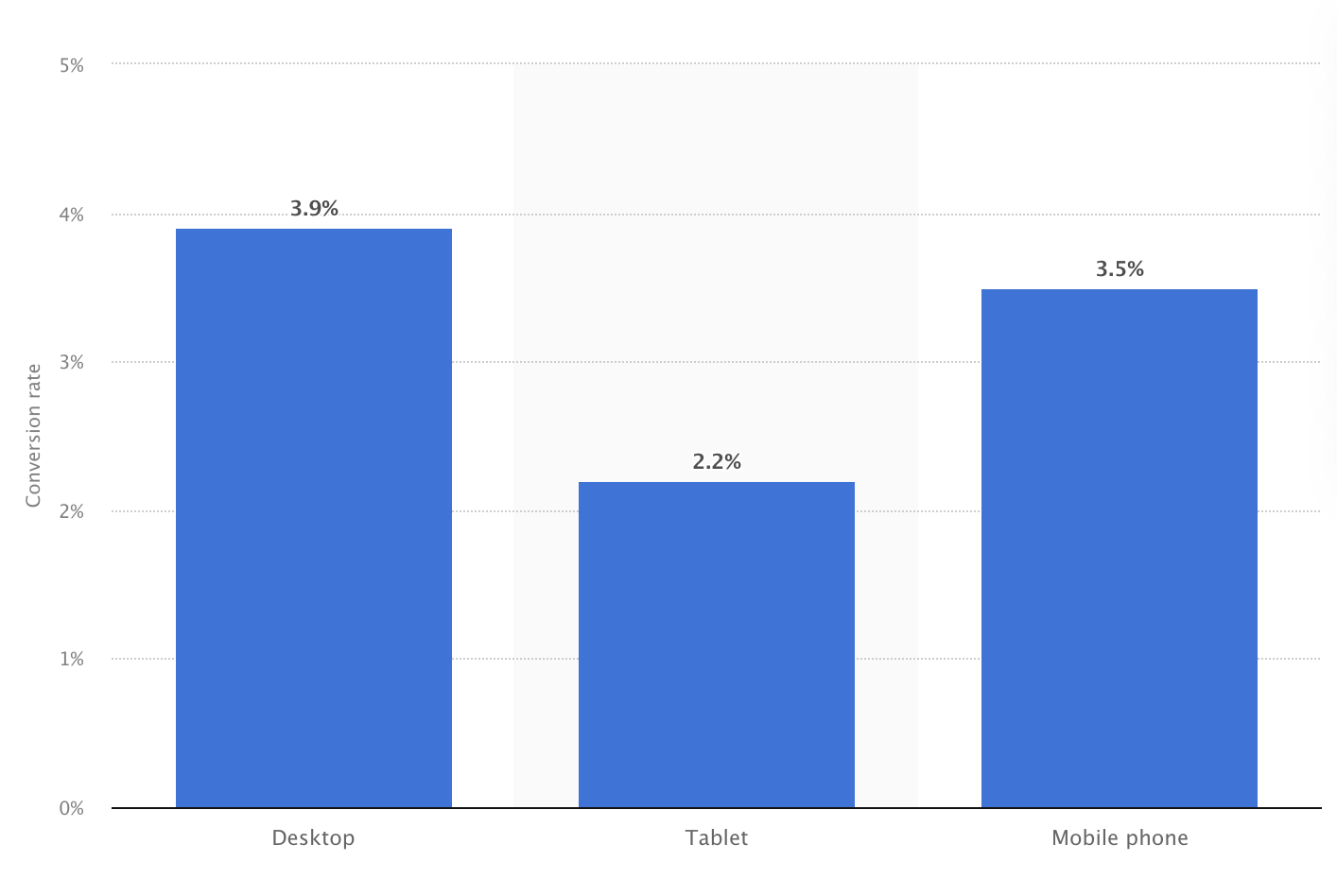 I should highlight that the average conversion rate for mobile phones in 2020 was just 1.53%. That’s a huge increase, leaping over tablets, and almost catching up to desktop.

Smartphones are getting increasingly “smarter,” consumers are spending more time on their phones, and as we move into a more mobile-first world, I expect this number to keep rising.

In 2021, the United States spent over 186 billion U.S. dollars on digital ads, which was more than what China, the United Kingdom, Japan, and Germany spent combined.

With most of this money spent on Google Ads, there’s clearly a lot of competition.

Assuming you want to drive substantial returns on your ad spend — aka high conversion rates — let’s dive into what the conversion rate benchmarks are for PPC.

Heap, a data behavioral analytics company, examined conversion rates by ad providers and found that Google and Bing have the highest conversion rates, at around 8%, which is 1.5 times higher than Facebook’s.

I find this fascinating because it looks like Google Ads have stood the test of time, while Facebook ads have started to reach a saturation point.

It makes sense because social media ads are an interruption-based process, while search engine ads meet users based on the intent of their search query.

To this end, prospects from search engine ads are usually more qualified and interested right off the bat.

Check out the conversion rate spread on this image from Heap’s research and notice the difference between providers. 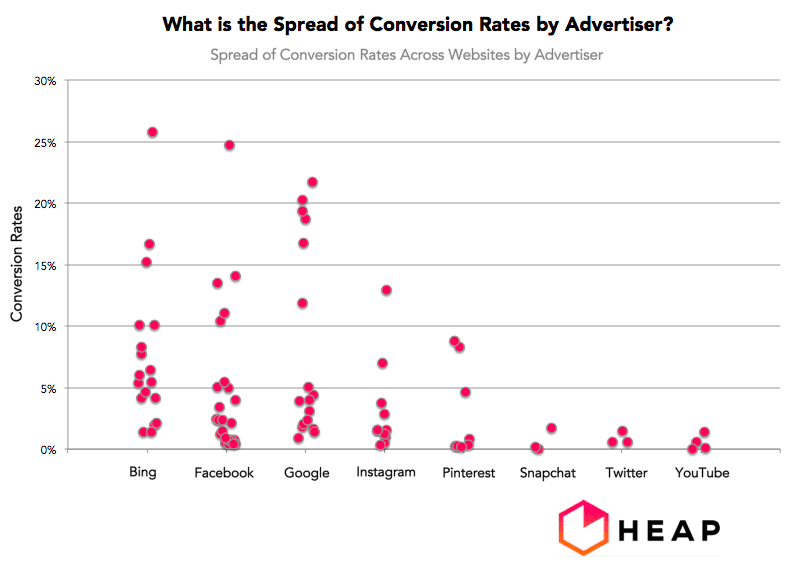 Bing, Facebook, and Google have the greatest conversion rate spread.

The variance could be due to several factors. Perhaps less experienced advertisers on these platforms or users conducting CRO experiments.

In the same way, the high conversion rates are likely indicative of expert advertisers and whiz-bang copywriters who precisely understand their audience’s pain points.

The spread is so wide on these platforms because there’s no way anyone can sustain a 25% conversion rate once the target audience grows too large.

Let’s break these down and look at the most popular platforms, Facebook and Google.

The infographic below shows an average conversion rate across Google Ads at 4.40%.

There’s also a significant difference between industries, with the lowest (apparel) hovering at less than 3% and the highest (vehicles) at nearly 8%. 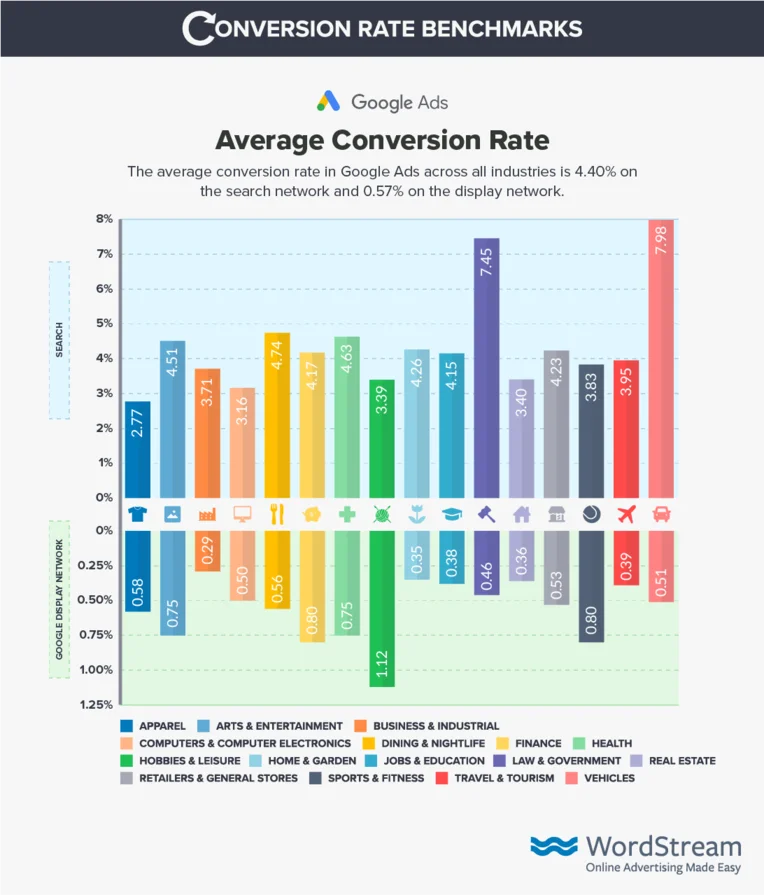 We can also see a massive difference between the average conversion rate on the search network (4.40%) and the display network (0.57%).

This comes back to what we discussed earlier — there’s an obvious difference between someone actively searching for an answer and someone being interrupted while browsing.

I think this is a fascinating insight into user behavior online.

Past research shows a conversion rate benchmark of 3.75% for the search network and a benchmark of 0.77% for the display network.

That’s a 17% improvement in search but a 26% plunge in the display network! Users are tolerating interruptions less and less.

The conversion rate benchmark across all industries on Facebook Ads is 9.21%. 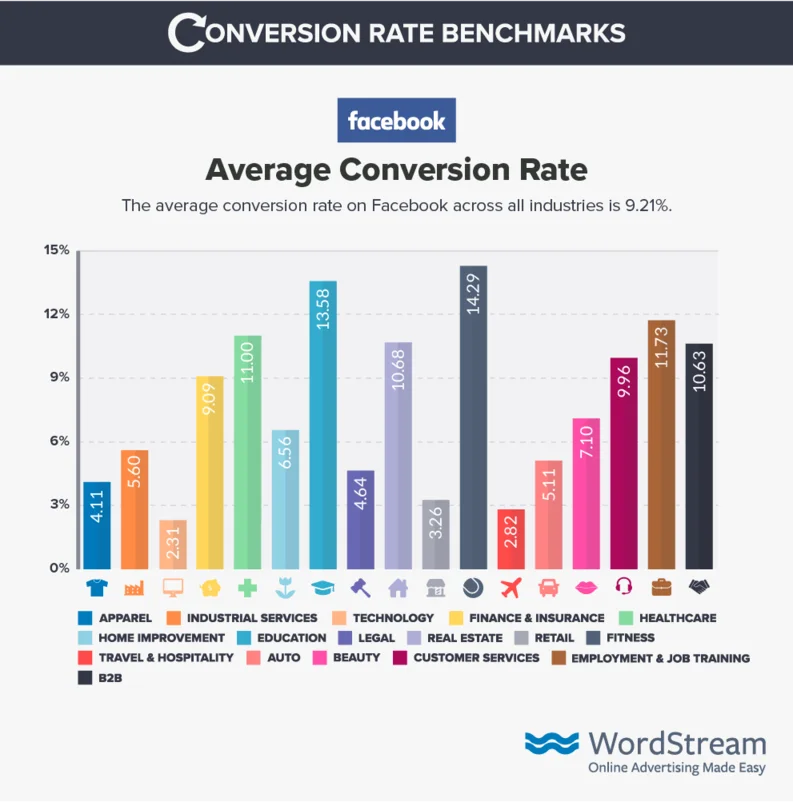 If you’re running a gym, a personal training service, or any other fitness-related business, failing to advertise on Facebook is a ginormous mistake. The average advertiser in this industry has an average conversion rate of over 14%!

What is a good conversion rate?

Conventional wisdom says that a good conversion rate is somewhere around 2% to 5%, others will say it’s anywhere above 10%. But it just depends. There’s no one-size-fits-all rate. Conversion rates vary by industry, product, traffic source, landing page copy, what you define as a conversion, and so much more.

The purpose of measuring conversion rate benchmarks is to gauge how well your company is performing against competitors in your industry. It helps you determine if your conversion rate is better, worse, or the same as key competitors so you’ll know what changes (if any) need to be made.

Is a low conversion rate bad?

How do you calculate a conversion rate?

What is conversion rate optimization?

Conversion rate optimization (CRO) is the systematic process of increasing the percentage of website visitors who take a desired action — be that filling out a form, becoming customers, or otherwise.

Conversion rates are by far one of the most important metrics for B2B companies to pay attention to.

After all, it directly impacts your revenue and long-term success.

But before digging into conversion rate benchmarks, remember these numbers are guidelines.

To maximize marketing performance, you should take a more collaborative approach to understand what constitutes a high-quality lead. Only then should you use that insight to reduce churn, improve retention, and increase revenue.

Take this quick quiz to see how your conversion rates stack up!